In sorting through some old files recently, I found this account of the International Money Musk Moment that David Smukler and I instigated in 2009. It just might be of interest. Here's the tune: 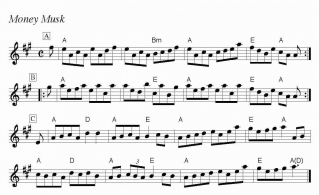 It's Fun to Hunt: The Enchanted Wood

Ralph Page kept a regular column in his Northern Junket magazine in which he shared tidbits that he unearthed in his research into newspapers in the 1800s. I share his fascination with the roots of our contemporary dances, so have borrowed his "It's Fun To Hunt" title to describe a few of my own forays into the past.

Back in the 1970s and 1980s, caller Tony Parkes did a lot of audio recording at dances. Many of his recordings were recently digitized by Jon Thunberg, a volunteer working with the New Hampshire Library of Traditional Dance and Music, part of Special Collections at the UNH library in Durham. Wearing my multiple hats as dance historian and coordinator of the Square Dance History Project (SDHP), I received from Jon a DVD data disk with 1.8 GB of mp3 audio files and a spreadsheet listing available information about each tape.

Tony and I have talked for years about his writing an article on "Great Callers" that we would use as the foundation for an exhibit in the SDHP. I created a grid listing the callers we'd include, and checked off appropriate columns when we acquired video, audio, or photographs of each person. Several callers had no audio checked off, but Tony was certain that he had live recordings for them.

Many years ago, our local Revels North mounted a Scandinavian-themed show that featured Norwegian dancing. In one particularly lovely moment, a male dancer led two women, one in each hand, through a Telespringar. I watched, entranced, as the dancers formed a kaleidoscope of motion, whirling, spinning, twirling, weaving in and around and over and under, a seamlessly turning flow set to lovely music.

"I want to do that!" I thought, and I made several attempts, including local weekend workshops led by Karin Brennesvik, a famed Norwegian dance instructor. I remember well the first session, where we spent the first twenty minutes just walking around the Tracy Hall floor in time to the music.

How Complicated Does This Need to Be?

I've written elsewhere about the push toward ever-more-complex choreography on the contra and square dance floor. The short story is that the number of figures one might expect to meet today in a few nights of dancing has nearly doubled from the early 1970s when I started. Some of the push comes from those avid dancers whom Ralph Sweet, writing in the 1960s and referring to ardent modern Western square dancers, dubbed the "overactive 10%." That's a whole separate discussion, but some of the responsibility certainly falls on the shoulders of callers, present company included.

We callers spend so much time with dances, looking through our ever-growing stack of cards, that we're hyper-alert to a new wrinkle: "Ooh, this is different. It'll be fun!" And so we introduce a different figure, in much the same way that MWSD callers of an earlier generation created such a vast complex of dance moves that CALLERLAB was created to bring order to chaos.

The last few summers, I've had some opportunities to counter that trend.

This list comes from a group that's far removed from the country dance world—"bop" is an inclusive term for related couple dances including swing, lindy, jitterbug, and shag—but it's fascinating how so many of the guidelines offered here apply to contras, squares, or English country dance.

ALL YOU EVER NEED TO KNOW ABOUT RELATIONSHIPS
CAN BE LEARNED IN A DANCE CLASS
Published by American Bop Association in November, 2003 Newsletter