Square Dance Hall of Fame: Bob Osgood, founder and editor of Sets in Order / Square Dancing magazine, and the associated American Square Dance Society, created a Hall of Fame to recognize significant individuals in the history of square dance. From 1961 to 1983, 34 people were given this recognition, which included a commissioned portrait by artist Gene Anthony. No site online currently honors these individuals; indeed, just trying to find out who they are presents a challenge. The portraits are displayed in the Dance Center operated by the Lloyd Shaw Foundation in Albuquerque. Working with colleagues around the country, we are developing an online display or the portraits along with biographical information, photographs, and audio files.

Ted Talk: Ted Sannella was an internationally-known caller, choreographer, author, and mentor for many in the traditional square and contra dance community. He published more than 170 dances, including 41 of Ted's Triplets, a three-couple dance form adapted from English country dance. David Smukler and I are collecting stories and photographs from people who knew Ted and plan to share what we collect in various ways. November 18, 2020, marked the 25th anniversary of Ted's death at age 67. 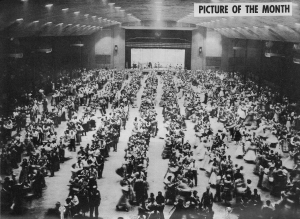 Square Dance History Project: Contra dancers today see several hundred people at a gathering and think it's a large crowd; callers of modern western square dancing, on the other hand, can speak from experience of calling for 700 squares at a time. In 1950, the city of Santa Monica, CA, celebrated its Diamond Jubilee. Lloyd Shaw was invited to MC the world's largest square dance, a five hour event that included 15,200 dancers and an estimated 35,000 spectators. Indeed, millions of people were involved a generation ago in square dancing. This digital library and website, launched in 2012, contains nearly 1500 items. The collection focuses on moving images to document the historical antecedents and the many different regional styles of square dance throughout all parts of North America; in addition to videos online, SDHP has several hundred audio files (including many singing squares), photographs, samples of dozens of historic square dance magazines and festival programs, and text. One other feature is a series of interviews with callers and dance historians.

Contra Dance Diaspora: This is a large collection of personal stories and group histories focusing on the national spread of contra dancing as an activity. Currently it is more than 400,000 words, or nearly 800 single-spaced pages, a file that puts in organized fashion information about contra dance history from all parts of the country. The archive is particularly strong with contributions from "Dudley dancers;" these young folks in the late 1960s and early 1970s took the living New England contra dance tradition that they had learned from Dudley Laufman and spread it to far corners of the United States. If you'd like to contribute your own story or a history of your local dance group, please get in touch. Read more.